How Whittlesey Dog Training Society was founded by Bill Bedford......... 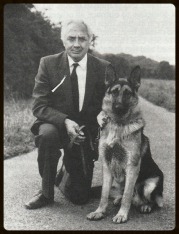 Born in 1922 in Whittlesey, Peterborough and apart from doing Service with the RAF had always lived in the area until he passed away in 2010.

He was married with one daughter Lorraine.  It was during the six years Bill was in the RAF that he first became interested in Alsatians (as they were then known) and especially in their training.

After leaving the forces in 1948 he obtained his first Alsation (GSD) Ropere Ace, a sable dog by Tarzan of Lemair, who was quite well known locally in the show ring.  It was his first dog, Acew started a life long interest in the breed.

With the help of Tommy Beavis, a local dog handler, Bill started obedience training and later decided to form the Whittlesey Dog Training Society in 1950, being the founder Chairman and Chief Instructor, positions which he held until 2008 retiring due to ill health.

Having worked a dog from the beginner stage through to Class C he started an interest in Judging and in fact he still occassionally judged all classes until 2000.

One of his most outstanding dogs was Warrior of Lexter, a handsome black and tan dog who won well in obedience and breed.  He had a completely unflappable temperament and keen scenting ability, in fact in all the years he worked he never once failed the scent exercise.

Bill attended one of the first Instructors Training Courses put on by the Kennel Club which was held in Hastings.  Over the years since then he successfully ran Instructors Courses in Peterborough based on the principals of that course.

It is always nice to know one's efforts have been appreciated and after 25 years as Chairman of Whittlesey Dog Training Society he was presented with a superb oil painting on Lorrainford Principal, Reserve CC winner and a dog he was particularly fond of.

NO PRE-REGISTRATION required for:

(Training fees for these classes are payable on attendance only)