and operates under KC Regulations.

We are so very PROUD to announce that Whittlesey Dog Training Society received an award at The Kennel Club Annual Awards Presentations 2015, we were awarded 2nd Place in the category of Kennel Club Registered Dog Training Club, this is a national award and we thank all instructors, committee members, members and their dogs for their hard work in making this award possible - CONGRATULATIONS and well done.

Initially established in Whittlesey, membership grew very quickly and a new hall was found in Peterborough where we trained at St. Pauls Church Hall for 18 years. In recent years we moved to Westwood before finally becoming firmly established  at Orton Waterville Village Hall where we meet on a weekly basis on Monday & Tuesday evenings (excluding Bank Holidays).

Meet the Officers, Committee and Instructors of WDTS 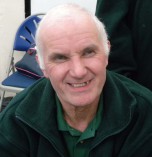 I have been working with dogs for almost 50 years in both obedience and show rings internationally, I am also a registered judge.

My wife and I joined WDTS over 30 years ago and have been strongly involved with the club for many years.  It was a privilage to accept this position of President of the Club and I am proud to support the commitment shown by its officers and committee.

After retiring we moved to Florida in the USA where we continued showing and made up an American Champion however in 2020 we relocated to Lanzarote Canary Islands but with technology I am able to attend meetings and remain strongly committed to the well being of this very successful club.

I have worked with dogs since leaving school at the age of 14 years, and although I started in boarding greyhounds kennels I went into grooming and trimming, once qualified I ran my own business for several years when I purchased my first Beagle.

In 1967 I started training at Whittlesey Dog Training Society and was hooked!

A few years later I was running a very busy boarding kennels for our late Chairman, Bill Bedford, we showed, worked and bred GSD's.  About 1980 I started judging GSD's at Open Show level and also judging Obedience Open Shows up to Class A.  After owning three Beagles as house pets I decided to try something a bit easier so purchased a Toy Poodle, Leo, who won at Breed and Obedience Shows, then came Chia, one of a kind, not show standard but she enjoyed Obedience and loved Demonstrations and being the centre of attention.  My last one Sari was well known at the Club and we also went to a few Open Obedience Shows and sometimes even got placed!  Now I have only Jacey and Hapi as I live in sheltered housing and they will not allow me to have more, and believe me I have tried!

About 35 years ago I qualified as an Instructor and I still really enjoy teaching obedience and ringcraft, although some dogs, and handlers, can be very trying it makes it all worth while when you see an unruly four legged horror turn into a well mannered pet.

20 years ago I became Secretary of this Club and in 1999 became Treasurer as well, so I still have plenty to keep me busy despite retiring 4 years ago.﻿

I have had dogs all my life starting with my first puppy at the age of one!  I have always had Jack Russell's and also several x-breeds many of which have been rescue dogs which have been a challenge but very worthwhile.  The time and effort put in really paid off as they all had a very long and happy life.

I now have my first pedigree dog, a French Bulldog called Winston, this had been a challenge, I thought I was stubborn until I met Winston, he has such attitude and character.

We started at Whittlesey Dog Club in February 2015, Winston was a very shy dog and would not even walk through the door, so we just sat for a few weeks watching all the other dogs and socialising him before starting classes.  What a turnaround, he has now passed his beginner obedience course, now working in the Intermediate class and working towards his Bronze KC Good Citizen Award while also continuing with his obedience classes.

We also work in the agility class which Winston absolutely loves, he really enjoys letting his hair down and no jump seems too high working at such speed, it's amazing to see a French Bulldog doing Agility, yes Agility!

NO PRE-REGISTRATION required for:

(Training fees for these classes are payable on attendance only)